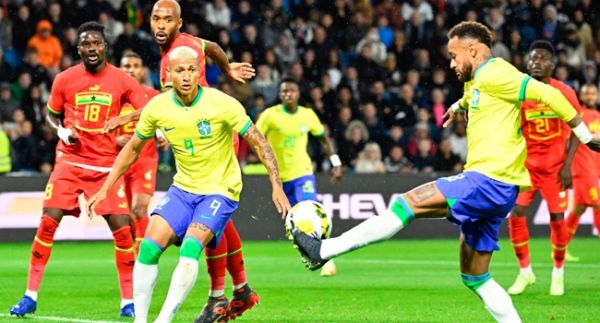 The Black Stars of Ghana have succumbed to a 3-0 defeat at the hands of the Selecao of Brazil in an international friendly game played at the Stade Oceane in Le Havre, France on Friday.

Doom came early for the Ghanaians when Tite side opened scoring in the opening 10 minutes as Marquinhos fired a towering header past the Ghanaian goalkeeper to set up an interesting night of football.

Vinicius Jr and Neymar ensured that the Ghanaian defence knew no respite as they threatened on multiple occasions with assists and attempts at goal.

The Paris Saint German ace, however, went on to register two assists for Tottenham forward Richarlison who grabbed a brace on the night.

Richarlison scored his first in the 28th minute with an exquisite finish to the bottom right corner from Neymar’s pass.

His second then arrived just before half time as Neymar whipped in a cross which he connected to, making it three for Brazil.

Ghana coach, Otto Addo handed Inaki Williams, Tariq Lamptey and Mohammed Salisu their national team debut coming off the bench in the second half – a decision Ghanaian fans have called out in respect to the pedigree of the opposition they faced.

Ghana will now shift focus to Tuesday’s friendly clash with Nicaragua in Spain as they continue preparations for the 2022 FIFA World Cup in Qatar.

The Black Stars are drawn in Group H alongside Portugal, Uruguay and South Korea.