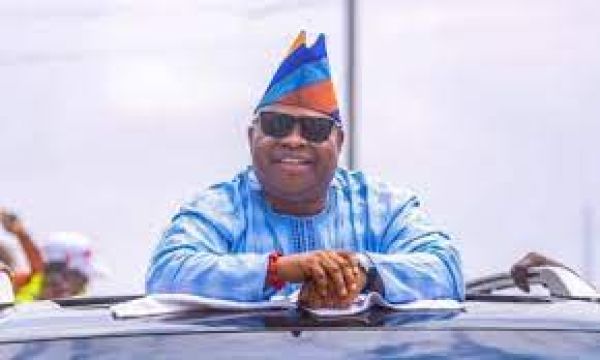 Governor Ademola Adeleke of Osun State has promised to correct the injustices done to the people of the state by the Gboyega Oyetola-led administration.

Adeleke made this known at the Osogbo-city stadium on Sunday after his inauguration as the sixth governor of Osun State, Naija News reports.

In his inaugural speech, governor Adeleke as vowed to address all wrong policies and corruption acts perpetrated by the past administration.

The governor assured the people of the state that the Peoples Democratic Party (PDP) government would meet their expectations as he assume mantle of leadership.

He promised that his administration will demonstrate a high sense of urgency, transparency, justice and innovation to tackle and solve the problems of poverty, illiteracy, disease, and poor infrastructure in the state.

He said: “I am well aware of the fact that my responsibility as the Governor and Chief Security Officer of Osun State entails meeting the legitimate expectations of our people.

“Under my watch as the Governor of Osun State, I will boldly correct all past injustice, corrupt acts or policies by any previous administration which are against the collective interest of our people.

“Our administration will demonstrate a high sense of urgency, transparency, justice and innovation to tackle and solve the problems of poverty, illiteracy, disease, and poor infrastructure.

“Your Governor will be a people’s Governor. I will be accessible, responsive, consultative and proactive in handling small and big matters of State Governance.”