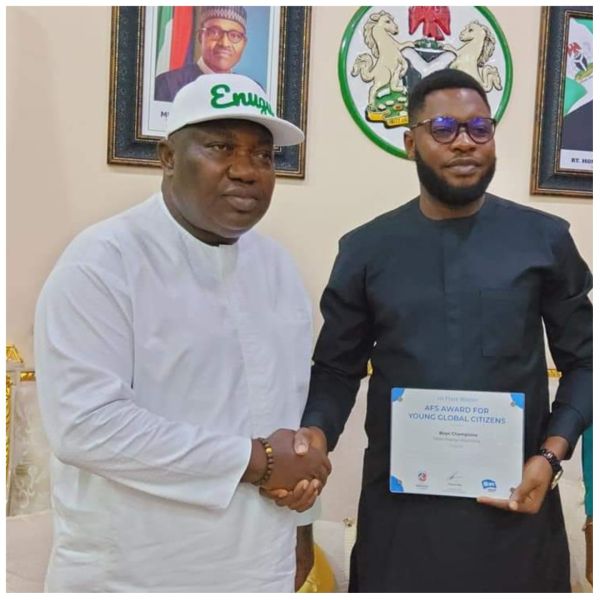 Mr. Alumona, who was accompanied by his wife, Dr. Chinenye Beatrice Uzochukwu and the Special Adviser to the Governor on Diaspora Matters, Mrs. Olangwa Ezekwu on the visit, formally presented the prestigious award to Gov. Ugwuanyi and invited the governor as a Special Guest of Honour to a youth leadership conference being organised by his organisation, Boys Champions, Washington, DC, at The Base Landmarks Event Centre, Independence Layout, Enugu, on November 25, 2022.

The AFS Award winner from Udenu Local Government Area of Enugu State, used the opportunity to commend Governor Ugwuanyi for his good works, especially your commitment to youth development, and thanked the governor and his administration for congratulating him earlier on his award.

It could be recalled that Governor Ugwuanyi’s administration had congratulated

Mr. Alumona on his emergence as the winner of the 2022 AFS Award for Young Global Citizens, expressing delight at the uncommon emergence of a young Nigerian of Enugu extraction.

In a statement by the Special Adviser to the Governor on Information, Steve Oruruo, the state government took special cognizance of the huge inspiration and unprecedented impetus this phenomenal feat will invariably engender in the psyche of our teeming youths.

The statement added that of greater and more enduring significance is the fact that this is the first time an African is winning this prestigious award since inception in 1914.

The state government commended “the unflinching sense of dexterity, unwavering commitment, unyielding vigour, sustained candour and unflappable diligence with which our illustrious son has pursued the emancipation of the global community; a seemingly intolerant world and elimination of all prejudice against persons in special education, especially, women and the girl child.”

According to the statement, “the tenor and purpose of his ‘BOYS CHAMPION ORGANIZATION’ align completely with the state government’s deliberate policies of prioritising the rejuvenation of education, welfare and security of the people while maintaining zero tolerance for all forms of violence against humanity.

The Government of Enugu State hereby enjoins the youths of the state to keep striving relentlessly for more laurels while promising to partner with Mr. Noel Ifeanyi Alumona and his organisation for proper domiciliation of the impacts of this remarkable and colossal accomplishment within the fabrics of our immediate societies.

The visit was also witnessed by the former Chief of Staff to the Governor and candidate of the Peoples Democratic Party (PDP) for Udi/Ezeagu Federal Constituency, Rt. Hon. Dr. Festus Uzor