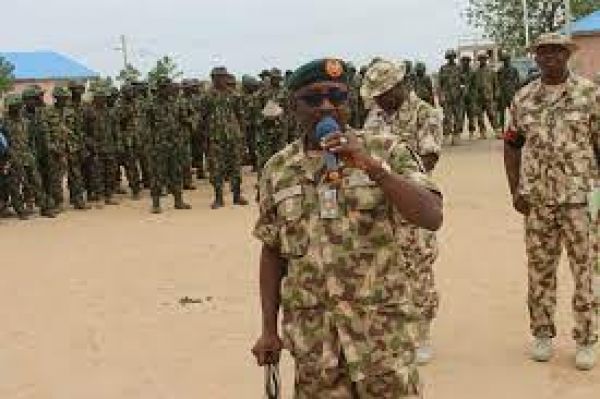 The General Officer Commanding 81 Division Nigerian Army (NA), Maj.- Gen Obinna Ajunwa, has charged officers and men of the Division to perform their duties within the limits prescribed by law in order to portray the Army in good light during peace support operations.

Gen Ajunwa, who was represented by the Division’s Training Officer, Brig.- Genl Danladi Abdullahi, gave the charge during a sensitisation workshop organised by the Department of Army Civil Military Affairs (DCMA) on enhancing the professionalism and responsiveness of the personnel.

According to the GOC, the move is to reposition the Nigeria Army for better operational performance, noting that the “NA is currently conducting internal security operations across the country with other security agencies. Therefore, high level discipline and professionalism is required from each soldier at all levels to ensure a successful operation.”

He added that this is in line with the vision of the Chief of Army Staff in having “a professional Nigerian Army ready to accomplish assigned mission within a Joint Environment in Defence of Nigeria.”

During the workshop, several well-packaged and thought-provoking lectures were delivered, including the legal status of a soldier, core values of the NA, laws and principles of armed conflict, fundamental human rights under the 1999 Constitution; and principles of laws and justification for the use of force.

There was also an interactive session where participants cleared their doubts on some legal issues concerning their assigned duties during internal security operations.