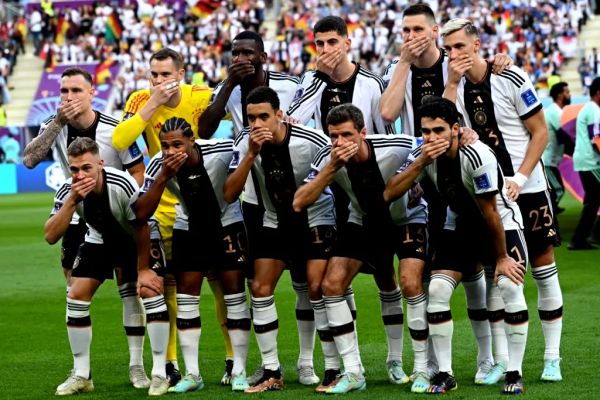 Players of Germany gesture as they pose for the group picture ahead of the Qatar 2022 World Cup Group E football match between Germany and Japan at the Khalifa International Stadium in Doha on November 23, 2022. (Photo by Ina Fassbender / AFP)

Germany’s players covered their mouths during the team photo before their World Cup opener against Japan on Wednesday in an apparent protest over FIFA’s refusal to allow rainbow-themed armbands.

Captains of seven European teams had planned to wear the anti-discrimination armbands as part of a campaign for diversity during the tournament in Qatar, but backed down over the threat of disciplinary action from world football’s governing body.

A joint statement by the FAs of England, Wales, Belgium, Denmark, Netherlands and Switzerland expressed frustrastion with FIFA’s decision which they believe is unprecedented.

The statement reads: “FIFA has been very clear that it will impose sporting sanctions if our captains wear the armbands on the field of play. As national federations, we can put our players in a position where they could face sporting sanctions including bookings, so we have asked the captains not to attempt to wear the armbands in FIFA World Cup games. We were prepared to pay fines that would normally apply to breaches of kit regulations and had a strong commitment to wearing the armband. However, we cannot put our players in the situation where they might be booked or even forced to leave the field of play.

“We are very frustrated by the FIFA decision which we believe is unprecedented – we wrote to FIFA in September informing them of our wish to wear the One Love armband to actively support inclusion in football, and had no response. Our players and coaches are disappointed – they are strong supporters of inclusion and will show support in other ways.”

The armband featuring a “heart containing colours representative of all backgrounds” was proposed by the UEFA Working Group in support of inclusion and diversity.