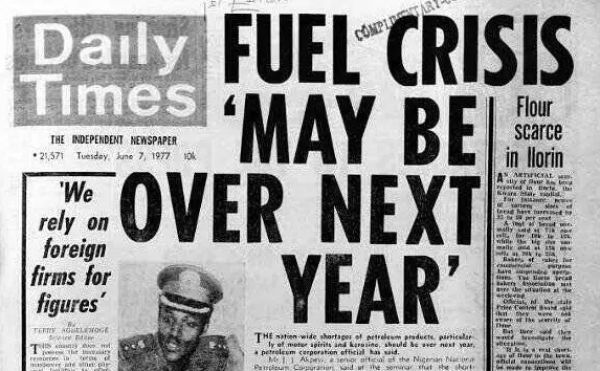 This is the final year of President Muhammadu Buhari in office as a civilian leader. He was elected for a four-year tenure in 2015 and releected in 2019.

The former Head of State ruled as a military leader from 1983 to 1985 when he was overthrown in a military coup plotted by Gen Ibrahim Badamasi Babangida (rtd).

Before he served as Head of State, Buhari was Minister of Petroleum.

A June 7, 1977 edition of Daily Times, Nigeria’s No 1 newspaper quoted Buhari as promising that nationwide shortages of petrol and kerosene “may end next year”.

However, 46 years later, the President is still the minister of petroleum and fuel crisis still persists.

Media reports since 2015 have shown that there have been reports of fuel scarcity at least once in a year since the President came on board, except in 2018.

Nigerians, on a yearly basis, usually swallow the bitter pill of queuing up at petrol stations to buy fuel to power their cars or generators, despite the fact that the country is blessed with abundance of the commodity.