FIFA World Cup: Time running out for Lionel Messi but are stars aligning? 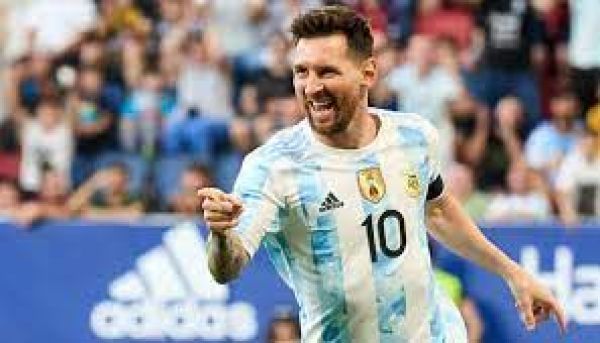 Spain coach Luis Enrique said earlier this week it would be “unfair” if Argentina great Lionel Messi was never to win the World Cup.

But the seven-time Ballon d’Or winner is running out of time and opportunities.

Alongside Portugal’s Cristiano Ronaldo, the Qatar extravaganza will likely be the fifth and last World Cup for one of the two outstanding players of their generation — believed by many to be the two greatest footballers of all time.

Unlike previous contenders for the title of greatest of all time — Brazil’s Pele and Diego Maradona of Argentina — at least one, and maybe both, will never lift football’s greatest prize.

Yet in the case of Messi, this may well be his best chance yet to win that elusive prize.

He cut a distraught figure in 2014 after Argentina succumbed 1-0 to Germany in the final in Brazil, even briefly announcing his international retirement in 2016.

He changed his mind and last year led Argentina to their first major title in 28 years, defeating hosts Brazil in the Copa America final by the same scoreline and in the same Maracana stadium where they had floundered seven years earlier.

Argentina head into this tournament on the back of a 36-match unbeaten run as one of the clear favourites.

Their group does not appear, on paper at least, the most taxing.

They begin against Saudi Arabia on Tuesday, followed by clashes with Mexico and Poland.

“Argentina are one of the favourites for the whole World Cup,” said Poland forward Robert Lewandowski earlier this week.

“They have not lost for 30-odd games, they’re very dangerous opponents for everyone.”

As the new darling of the Camp Nou in Barcelona, Lewandowski has been able this season to see first hand the legacy left behind by Messi in Catalonia.

“He is a Barcelona legend. You see it all over the place being at the club,” the Pole said.

“He is Argentina’s leader, one of the top players. We know who we’re going to play against, it’s a huge challenge.”

Lewnadowski will likely be among the last players ever to play a World Cup match against Messi, along with the unfancied but confident Saudis.

Midfielder Abdulellah Al-Malki insists he will not be overawed by the occasion.

“He’s a legend and it’s a dream for any player to play against him, but we represent Saudi Arabia and we fear no-one,” he said.

Messi’s predecessor as Argentina icon, the late Maradona secured his footballing immortality by inspiring the country to their second world title in 1986.

Messi would desperately love to add World Cup glory to all his other accolades that include four Champions League crowns and 10 La Liga titles.

And he’s not alone.

“If Spain don’t win the World Cup, I would like Argentina to win it because of Messi,” Enrique, who coached Messi at Barcelona for three years, said on Twitch earlier this week.

“It would be unfair for Messi to retire without winning a World Cup.”

There is a feeling that despite the recent retirements of attacking talents such as Sergio Aguero and Gonzalo Higuain, Argentina have a better balance in the squad than in previous years.

There is an industrious midfield including Rodrigo De Paul, Leandro Paredes and Alexis Mac Alister, and combative defenders in the mould of Cristian Romero and Manchester United revelation Lisandro Martinez, with the safe hands of Emiliano Martinez guarding the net.

It really is now or never for Messi but there is a growing feeling in Argentina that this will be the international swansong a nation and a legend have long dreamt of.