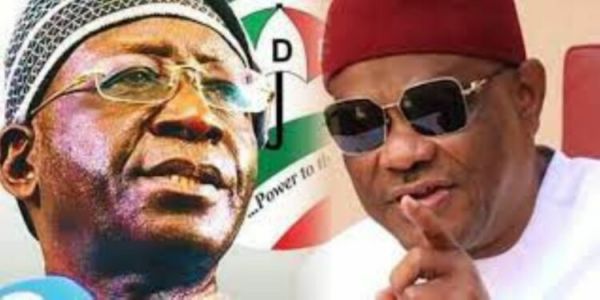 Governors elected under the platform of the Peoples Democratic Party (PDP) are reportedly mounting pressure on their Rivers State colleague, Nyesom Wike, to drop his call for the resignation of the national chairman, Senator Iyorchia Ayu.

According to The Nation, sources said the governors are pushing for reconciliation between the party’s presidential candidate, Atiku Abubakar, and Wike before the commencement of the campaigns on September 28.

The PDP Governors’ Forum Director-General, CID Maduabum, confirmed that the 13-member forum, which met last on June 8 in Abuja, would reconvene at the instance of Atiku.

It was also learnt at the weekend that former Ekiti State Governor Ayodele Fayose has accepted to be Atiku’s emissary to Wike.

A party source said: “The quest for the PDP presidential to ticket by some of them, which was a legitimate aspiration, was the source of all these reactions and a chain of disruptive events that we have witnessed immediately after the presidential primaries”.

The source expressed optimism that the governors will succeed in convening the meeting because majority of them have accepted in principle to attend.

Maduabum, who confirmed the proposed meeting, said: “Yes, I can confirm to you that moves are being made in that direction and consultations are ongoing to ensure its fruition. We are positive that this will be achieved in a matter of days”.

Many party elders have blamed Atiku and Ayu for failing to take the appropriately steps at the right time to address the post-presidential primary crisis.

The source expressed that the party chairman aggravated the crisis with his recent utterances against the governors, which dismissed them as children who were nowhere to be found when the PDP was being formed.

He said: “The national chairman did not help matters with some of his statements because these are the same governors who stood firmly by the party during turbulent times in the past.

“The PDP would have been smothered in the grip of Ali Modu Sheriff as national chairman way back in 2016. It took the bold initiative by the Rivers State Governor, Nyesom Wike and a few of his colleagues to rescue the PDP from Sheriff’s suffocating grip.

“Most of the people who have taken over the party today, were either in the APC where they went to seek greener pasture, or they simply stood by and watched the degenerating situation from their comfort zones.

“The credit of rescuing the PDP and bringing it back to national reckoning once again, should go mainly to Governor Wike and some of his colleagues who fought the battle up to the Supreme Court to rescue the PDP from the clutches of political hyenas.

“Although Wike too may have his own faults and excesses with his unguarded statements, he has done more good for the PDP than harm. He was at the battle front during the crisis that threatened the very existence of the PDP at the time.”

Also faulting the party chairman’s role in the crisis, another party elder recalled how the crisis has threatened the hitherto cordial relationship between Wike and Benue State Governor, Samuel Ortom.

The Nation reported that the source stated that Wike gave Ortom a free hand to nominate a candidate from the Northcentral zone for national chairman ahead of the party’s October 2021 national convention.

The source said stakeholders in the zone had initially penciled down former Senate President David Mark for the job and the choice was about to be sealed before Ortom proposed Ayu for the position.

The source, who is a member of PDP National Executive Committee (NEC) said Ortom took it upon himself to persuade Mark to step down for Ayu. He added that the Benue governor also pleaded with former Senate President Bukola Saraki to accept the choice.

He added: “On three occasions, Governor Ortom made personal visits to Mark to plead for his understanding. Mark, who is not given to such mundane struggles, took things calmly and withdrew from the race.

“Ortom also visited Saraki to get his endorsement. Saraki’s initial objection to Ayu’s nomination at the time was not personal. He didn’t want any candidate from his Northcentral zone to become chairman because of his presidential aspiration then. But Ortom was able to get him to support Ayu in the end.”

The source further narrated how Ayu’s disposition after he became chairman almost strained the relationship between Wike and Ortom, with the Rivers Governor voicing his suspicions about Ortom’s complicity in the chairman’s growing antagonism.

“At a point, Governor Wike actually confronted Ortom at a location in Abuja, accusing him of conspiring with Ayu to sabotage him. Wike was visibly angry at his friend, accusing the Benue Governor of having betrayed him.

“It took the intervention of former Information Minister, Prof Jerry Gana; a former Plateau State Governor, Jonah Jang; and a former Attorney General, Mr. Mohammed Bello Adoke to pacify Wike during that encounter. Although the two governors are still friends, it’s doubtful if they still enjoy the mutual confidentiality they used to share”, the source said.

Ortom, who is one of the PDP governors loyal to Wike, has joined other stakeholders in moves to ensure the resolution of the crisis through dialogue.

The governor had said that despite the criss, the PDP still stood a chance of reinventing itself and winning the 2023 presidential election.

Ortom had also blamed the PDP leadership for failing to activate the party’s existing conflict resolution mechanism to resolve the rift between Atiku and Wike before the crisis degenerated.