Latest News
[OPINION] Clipping the Wings of the CBN - Ganiyu A. Ogunleye
Why I stopped acting in romantic scenes – Mercy Johnson
Kim Kardashian fined $1.26m for cryptocurrency ad
2023: What Tinubu did in 1993, Atiku, Obi, others can’t match his competence – Al-Makura
Former Zonal Spokesperson Says PDP Is Resolving Its Crisis
Why Nigeria should invest more in brains exports and less in oil and Agric- PwC
Worshippers attempt attack on Father Mbaka’s replacement
Shaibu Husseini, Mildred Okwo resign from Nigeria’s Oscar selection committee
Asari Dokubo dares #Obidients to hold rally on Monday in S/East
World Bank canvasses 12 years compulsory education for girl child
PDP Crisis: I Wasn’t Part Of Decision To Pay NWC Members Housing Allowance – Orbih
Glad I did not reject pregnancies outside wedlock – Actor Charles Okocha
2023: Why Peter Obi Is Better Than Tinubu, Atiku, Others – Ezekwesili
Details Of Wike’s Meeting With Four PDP Governors Emerge
What Else Does Tinubu Need To Do To Prove He Is Not Dying Today? - Toyin Abraham
Friday, 12 August 2022 12:58

The court, on Thursday found 28-year-old Adetuberu guilty of the two counts of cybercrime preferred against him by the Ilorin Zonal Command of the Economic and Financial Crimes Commission.

The court was told that operatives of the EFCC, while acting on intelligence over the activities of the fraudsters also known as ‘Yahoo-Yahoo, within Ilorin metropolis and its environs recently arrested Adetuberu at Ogele, a suburb of Ilorin last week Wednesday. 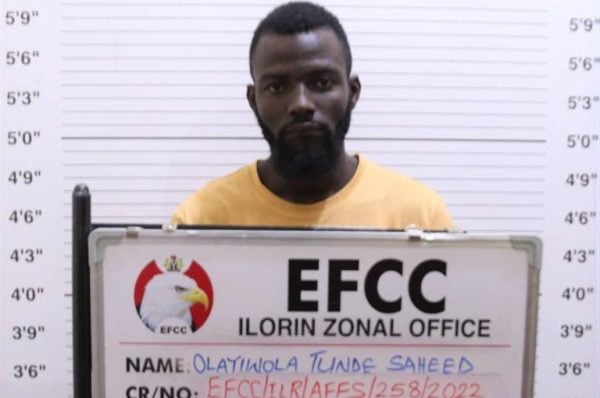 The EFCC Counsel, Sesan Ola, also revealed in the Court that the convict had in the course of the investigation, admitted that he ventured into ‘Yahoo Yahoo Business’ in 2016 and had, among other things, built a house with the proceeds of the illegal activities.

Adetuberu pleaded guilty to the two charges preferred against him when he was brought before the Court on Thursday.

Consequently, Justice Yusuf, while sentencing Adetuberu ordered the forfeiture of a three-bedroom flat acquired with the proceeds of the illegal activities, a Lexus car, different brands of phones, and a laptop, which are instruments of the crime as well as the sum of N921, 535.49 in his bank account to the Federal Government.

The judge, who gave the convict an option of a fine of N200,000, said his conviction would serve as a deterrent to others.

In a related development, Justice Yusuf also sentenced a 30-year-old aluminum fabricator, Olayiwola Saheed, who acted as “Loader” to co-fraudsters, to six months custodial imprisonment at the Federal Correctional Centre in Ilorin without an option of a fine.

Olayiwola, who hailed from Olorunda Local Government Area in Osogbo, Osun State, was found guilty of one count of possessing funds that he knew to be proceeds of unlawful activities preferred against him by the anti-graft agency.

In his judgement, the judge said that he found merit in the prosecution’s case, adding that the admittance of guilt by the defendant was enough evidence to convict him.

Justice Yusuf, while sentencing Olayiwola, ordered that the Toyota Camry car recovered at the point of his arrest, his phone, and a laptop, which are instruments of the illegal activities be forfeited to the Federal Government.

[OPINION] Clipping the Wings of the CBN - Ganiyu A. Ogunleye

Why I stopped acting in romantic scenes – Mercy Johnson

Glad I did not reject pregnancies outside wedlock – Actor Charles Okocha

2023: Why Peter Obi Is Better Than Tinubu, Atiku, Others – Ezekwesili

What Else Does Tinubu Need To Do To Prove He Is Not Dying Today? - Toyin Abraham

1O Things You Should Know About BBNaija Season 7 Winner, Phyna

SERAP Urges Buhari to Declare Assets at End of His Tenure

Where is Saraki? Ex-senate president missing from national honours’ list

White Money: How I was rejected thrice by BBNaija

Don’t expect much from new NFF board – Chris Green

I am strong and healthy, Tinubu replies critics (Video)