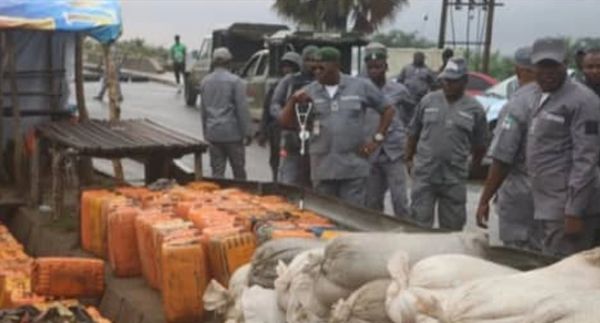 Officers of the Nigeria Customs Service, Zone A Federal Operations Unit, have seized 81, 425 litres of Premium Motor Spirit (PMS) in the Badagry Area of Lagos.

This was despite an attempt by the suspected smugglers to scare away the officers while engaging them with sporadic shooting during the all-night operation.

The Acting Controller of the unit, Hussein Ejibunu, who spoke on the seizure which was packed in jerrycans and sacks, explained that suspected the suspects used Dane guns to shoot at Customs officers who made the seizure.

He said the seizure was the result of painstaking intelligence and perseverance on the part of the officers who are committed to protecting the national economy.

Mister Ejibunu said ”perpetrators of this illegal trans-border fuel smuggling are saboteurs that must be stopped as they don’t mean well for the country”.

He decried a situation where the Federal Government spends a huge amount of money to subsidise fuel for Nigerians’ benefit but a few elements are smuggling it for selfish gains.

Acting Controller Ejibunu added that “the seizure is a result of serious intelligence.

“We have been monitoring them since last week, and the information came to me that some people are using sacks to smuggle petroleum products out of Nigeria.”

He declared that the unit has been on their lookout and that their cup became full.

“For someone to think that instead of carrying drums like the ones we intercepted a few days ago from Ayegun border where they brought in about 60 drums containing PMS about to be moved from Nigeria and hid them in a bush; it was where they went to secure trucks that we swooped on them.

“The only difference in this new one is that they used sacks to conceal the product and put them close to a creek from where they will be ferried out.

“The implications In the economy are multifaceted, in the sense that firstly, our country subsidized petroleum products for us for our own use, yet some recalcitrant people who believe that that is the way they can always survive still believe it is to shortchange the nation as well. And it is criminal, because it is our collective patrimony, yet some people now believe that they can smuggle it to make gains.

“When my men got there at exactly 1330hrs, they were shot at with Dane guns. And you know that there is a difference between Dane guns, pump action guns, and assault rifles like AK-47.

“They fired their Dane guns a few times and ran away, and since it was their terrain, they knew all the nooks and crannies to use for escape.

“We took possession because I moved in with 18 Hilux vehicles loaded with officers who were armed to the teeth because I was ready and knew what could come up.”

He further explains that “We have not slept; we went there this morning to see what we apprehended, and it was massive.

“The implications on the economy are multifaceted, in the sense that firstly, subsidized petroleum products for us for our own use, yet some recalcitrant people who believe that that is the way they can always survive still believe it is to shortchange the nation as well. And it is criminal, because it is our collective patrimony, yet some people now believe that they can smuggle it to make a gain”.

Sometimes in March, The unit whose sole mandate is to monitor illegal imports and export across the southwest zone, established a team with the sole duty to monitor stolen and diverted petroleum products making their way out of the country through the southwest border.