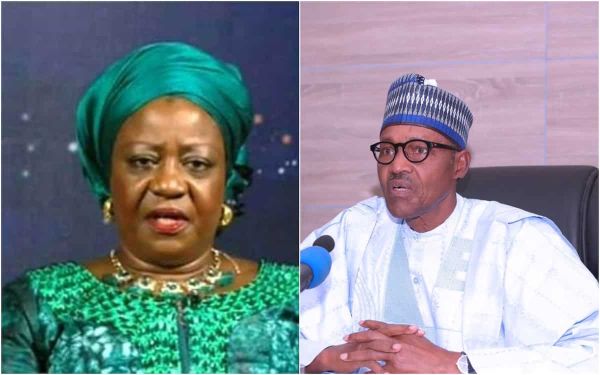 President Muhammadu Buhari has asked the senate to confirm Lauretta Onochie, his aide on social media, as the substantive chairman of the Niger Delta Development Commission (NDDC) board.

The president’s request was contained in a letter read by Senate President Ahmad Lawan on the floor of the upper legislative chamber on Wednesday.

Apart from Onochie, the president sent the names of 15 other nominees as board members of the commission.

This is not the first time the president would appoint Onochie to a position that is subject to the confirmation of the senate.

Onochie was nominated as a commissioner of the Independent National Electoral Commission (INEC) in October 2020.

Her nomination sparked outrage over concerns that she is a member of the All Progressives Congress (APC), but the presidential aide said she resigned her membership of the ruling party in 2019.

In 2021, when the upper legislative chamber considered and screened her for the appointment, she was eventually disqualified.

At the time, the senate disqualified her on the grounds that Buhari had already nominated May Agbamuche as the INEC commissioner from Delta — the same state Onochie hails from.

“In 2016, we confirmed a national commissioner from Delta state, Mrs May Agbamuche and confirming Onochie from the same Delta will violate the federal character,” Kabiru Gaya, chairman of the senate committee on INEC, had said at the time.