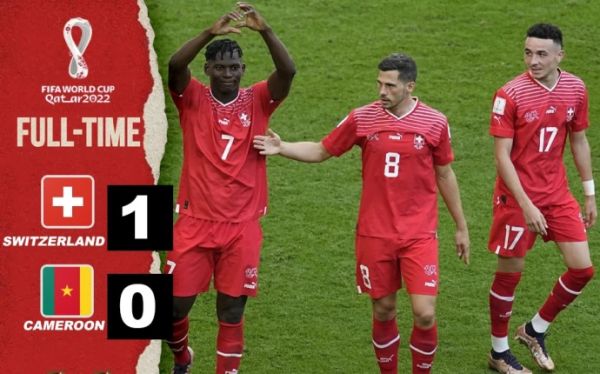 Switzerland edged past Cameroon in their Group G World Cup thanks to a lone goal from Cameroon’s native, Breel Embolo, who plays for the Swiss.

With respect to his native country, when he capped off a deft Swiss attack just after halftime, Embolo chose not to celebrate.

When Embolo was six years old, his family emigrated to Switzerland from Cameroon.

In 2014, he was given citizenship and swore devotion to the European country.

After putting up a creative performance at the Al Janoub Stadium in Qatar, it was sad that the Indomitable Lions lost, eventually.

However, the Swiss struggled in the first half against a strong Cameroonian side and really should have trailed as Eric Choupo-Moting, Bryan Mbeumo, and Martin Hongla all missed good chances.

The goal stunned Cameroon, and the Swiss also had the opportunity to increase their advantage, but Ruben Vargas’s chance was well saved by Andre Onana, while Embolo and Haris Seferovic were stopped by the Cameroonian.

The Indomitable Lions who have now lost eight straight games in the World Cup will be looking forward to bouncing back from the defeat when they face Serbia on Monday, November 28, 2022.