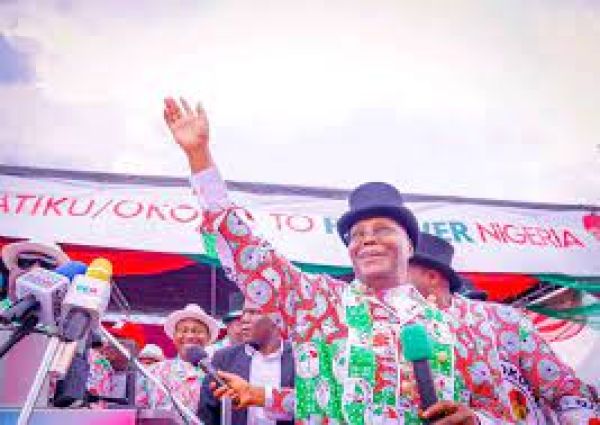 Atiku Abubakar, the presidential candidate of the Peoples Democratic Party (PDP), says the Niger Delta needs more restructuring than any other part of Nigeria.

The former vice-president spoke on Monday at the PDP presidential campaign rally in Yenagoa, the capital of Bayelsa.

While promising to devolve more powers to the Niger Delta, Abubakar said the region does not need to “beg” the federal government for everything because it produces the nation’s resources.

“We propose to restructure this country. You people in the Niger Delta need more restructuring than any other part of this country,” he said.

“We would give you more resources and power to deal with your problems. You don’t need to always beg the federal government for everything when you are actually producing the resources of the country

“So, we will devolve more power and resources to you in the Niger Delta.”

Abubakar also said every developmental project done in Bayelsa since 1999 was executed by the PDP administration.

“I want to remind you since the beginning of democracy, Bayelsa has been PDP and PDP has been Bayelsa,” he said.

“Everything you see in Bayelsa today was provided by the PDP government, everything. Therefore, I am calling on you, the people of Bayelsa, not to leave PDP; don’t make the mistake of leaving PDP.

“You have provided governors and a president, and you are going to provide many more. So, the future of Nigeria and Bayelsa is tied to PDP.

“I want to appeal to you. You have listened to my programmes. I said I am committed to implementing five key programmes in this country starting from the unification of this country.”

The former vice-president said he will unify the country and tackle insecurity.

“The reason why I want to unify the country is that we have never been this divided along a number of faultlines either north-south or Muslims and Christians,” he said.

“I am going to give every part of this country a sense of belonging in the next PDP government. I promise to tackle insecurity.

“Here in Bayelsa state, you have faced a number of security challenges, and you have lost so many people due to breach of law and order. I promise I will restore security in this country.

“I also said I am going to tackle the economy of this country. If you recall, the PDP government, between 1999 and 2015, had the best economy in Africa. But the APC has pushed us back and brought us down.

“We promise that we are going to tackle the economy and make sure that we provide jobs and other opportunities for our young men and women to be gainfully employed either in the private sector or public sector.

“Again, we promise that we would never see any more ASUU strikes. We would devote a lot of resources to education to make sure that our young men and women are educated and they continue to go to school without any interruption.

“These are the key areas of our developmental programmes. I appeal for your support and understanding and cooperation so that we can achieve all these goals.”