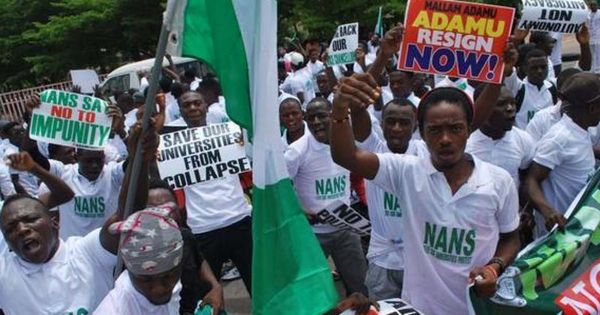 Members of the National Association of Nigerian Students have said they will not allow political campaigns billed to start later this month to hold.

The students said they will disrupt campaigns if Federal Government refuses to end the ongoing strike.

This is as students on Tuesday rolled out a new timetable for its nationwide protests.

In the timetable, signed by the ‘President-Elect’ of the student body, Usman Barambu, dated Monday, NANS scheduled the protests to hold zone by zone, from its Zone A to Zone F, with Abuja being the location for a final protest.

But addressing a press conference on Wednesday, the Chairman, NANS National Taskforce on #EndASUUStrikeNow, Ojo Olumide, reiterated the students’ commitment to sustained protest until the government resolves with ASUU.

According to him, NANS will continue to ground all the nation’s public assets from roads to airports if the federal government fails to resolve with the leadership of ASUU in no distant time.

He said, “For those misconstruing our struggle, we call on them to see reason with Nigerian Students and join us in the struggle to save public education in the country.

“The leadership of NANS demands a better deal for the education of the Nigerian masses because most of the children of the privileged few now study either overseas or in Private Universities established with our common wealth across the country by the same set of people we entrusted to govern us. This is more reason they will continue to turn deaf ears to the demand by ASUU for improved standards and conditions of learning in our public higher institutions.

“Our blocking of access to public roads and ports is just a warning. If the government fails to conclude all the negotiations and agreement with ASUU within the frame of two weeks, they will witness more protests and rallies all over the country, they will also witness the annoyance, anger, and frustration of Nigerians Students who have been at home for the past Seven months.

“As we promise them that we will not allow any political campaign to hold across the country until we are back to class. This government has pushed so many Nigerians Students into depression. We say enough is enough; we can no longer bear the brunt of this avoidable crisis in our nation’s public ivory towers again.”