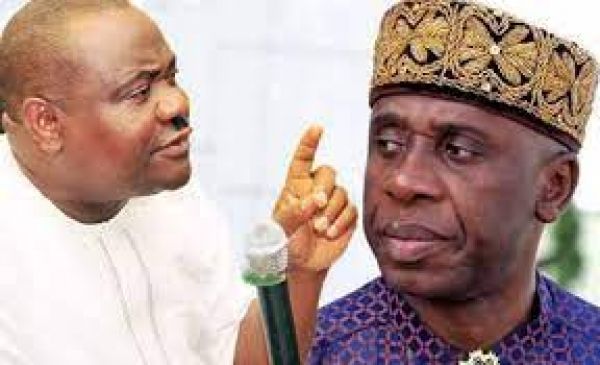 At this point, it is safe to say no matter how well you keep up with the Peoples Democratic Party (PDP) and its leaders and all the drama within, you cannot predict what happens in the next event or episode.

Last time was the raging call for the resignation of the party’s National Chairman, Iyorchia Ayu, and for a candidate from the South to replace him. Nigerians were, however, hit with a plot twist where Walid Jibrin resigned his position as the chairman of the party’s Board of Trustees (BoT). He cited his desire for peace in the party and his commitment to the victory of the presidential candidate, Atiku Abubakar, as his reasons for resigning.

“We all want to make Atiku Abubakar become the president by all means, and that is why I sincerely decided to step down from the BoT,” he announced at the BoT meeting on September 8. “I discussed this with the candidate and he agreed with me. I am sure if the party wins, I will be given a bigger position.”

He was immediately replaced by a former Senate President, Adolphus Wabara, from Abia State, who would serve in an acting capacity.

Many, particularly in the Atiku camp, believed that Mr Jibrin’s resignation and Mr Wabara’s appointment will bring the much-needed reconciliation and peace that the party needs especially since Mr Wabara is from the South East.

The push for reconciliation in the party was borne out of the Rivers State Governor, Nyesom Wike’s anger at the party and some party members for “breaching its constitution” and betraying him during the presidential primary in May.

Having lost the presidential ticket to Atiku and after Atiku failed to pick him as the vice-presidential candidate, Mr Wike would go on to threaten to work against the party in the 2023 general elections.

Besides bragging about having control over the votes that come from his state during elections, the governor also claims to be influential in many other states outside the South-south region – enough to garner an impressive number of votes from those states for any candidate he chooses to support.

Mr Ayu’s resignation as the party’s national chairman and a reshuffle of the National Working Committee (NWC), was part of Mr Wike’s condition to Atiku to get his support.

Well, Atiku and his camp would later tweak Mr Wike’s request and deliver Mr Jibrin as the sacrificial lamb – a sacrifice that was clearly not enough to appease the governor.

A “shame”, an “insult” and a few other words similar to these were Mr Wike’s reaction to Mr Jibrin’s resignation.

In his ‘usual expeditious manner’, to borrow the words of President Muhammadu Buhari in his letters to the Senate, Mr Wike would go on to lament how the PDP is unserious and unprepared for the 2023 polls and how the party comprises many enemies within and how he, again, fought for the survival of the party after it became an opposition.

His call for Mr Ayu’s resignation, he said, is to correct the lopsidedness in the party’s leadership structure. He has also described it as agitation for the inclusion of the South in the structure. Already, he has some southern governors like Samuel Ortom of Benue State, Seyi Makinde of Oyo State and Okezie Ikpeazu of Abia State supporting him.

Until Mr Jibrin’s resignation, most top positions in the NWC were filled with officials from the North.

Anyway, after his reaction, followers of the happenings in the party would expect one of two things to happen next – that Atiku and the PDP will reconsider Mr Wike’s demands and perhaps, try to reach a compromise or that the party would resist further humiliating or aggravating the governor.

None of that happened.

The party released the list of members of its Presidential Campaign Council (PCC). Among the 326-member list are the Sokoto State Governor, Aminu Tambuwal – Mr Wike’s foe – who was named Director General of the Council and Mr Makinde, Mr Wike’s ally, who was named the Council’s Vice Chairman South.

Mr Wike also made the list. He was named a member of the council.

“A whole Wike, member?!” were the reactions of many Nigerians who saw the list.

You would think that with his anger and threats and for failing to give in to his demands, the PDP would consider him for one of the top positions in the Council – or so many thought.

Different reactions have trailed the composition of the PCC and Mr Wike’s appointment as a member. While many say all the regions were properly represented on the list, others are of the opinion that the Council headed by Mr Tambuwal, is unfair to the South.

For Philip Aivoji, the PDP chairman, Lagos State, the South was properly represented on the Council, especially with the appointment of Governor Udom Emmanuel as chairman.

Another argument would be that it is not entirely safe to entrust Mr Wike with a huge responsibility on the Council, especially since he still holds a grudge against Atiku – the candidate he should be campaigning for.

The party’s failure to remove Mr Ayu as national chairman last week spelt ‘do your worst’ for Mr Wike and his team. But with the PCC list and Mr Wike’s appointment as a member, it appears the governor has been ‘re-relegated.’

No, he has not been silent. In fact, he has been busy delivering speeches at events and signing bills and commissioning projects and, as usual, throwing jabs at whoever he places at the receiving end.

He signed two impressive bills into law within the week – one that seeks to allow women to partake in inheritance in Rivers State and another to ensure compulsory treatment of gunshot wounds. At another time, he blamed leaders who are not committed to fulfilling promises, for the lingering strike by university workers.

Earlier in the week, his predecessor and former Minister of Transport, Rotimi Amaechi, was the victim of Mr Wike’s tantrums. He would go on to describe how much of a failed minister Mr Amaechi was and how he did nothing for Rivers State during this time.

But how he has chosen to stay silent on his appointment as a member of the PCC still baffles many. Usually, it takes the governor at most four hours to respond to issues like this.

Throwback to 8 September when Mr Jibrin’s resignation and Mr Wabara’s appointments were announced, Mr Wike responded even before the National Executive Council meeting was over that day. And when Mr Ayu called some of his supporters children, he replied in less than 24 hours. It has been over 48 hours, yet no word from Mr Wike or his camp.

His silence raises a lot of questions – is he okay with the appointment? Will he now work with Mr Tambuwal as the campaigns start in a few days? Has there been an agreement that Nigerians are not aware of?  Was he promised something bigger? And most importantly, why is he quiet?

Besides the opinion poll conducted by the NOI Polls, Atiku seems unbothered.

The poll suggests a three-horse race between Atiku and the candidates of APC, Bola Tinubu and Labour Party, Peter Obi.

Atiku would later fly out to Dubai for a “business trip” and leave his spokesperson, Daniel Bwala, to dismiss the result of the poll – which he described as “hallucination and concocted trash.”

While Mr Wike maintains that he is fighting for the inclusion of the South in the party’s leadership structure, many still believe he needs to calm down and not make decisions out of anger. As for Atiku and the PDP – and Tambuwal – next on the agenda are the campaigns.

And for we the spectators, we now know better than to predict what happens next at the party.