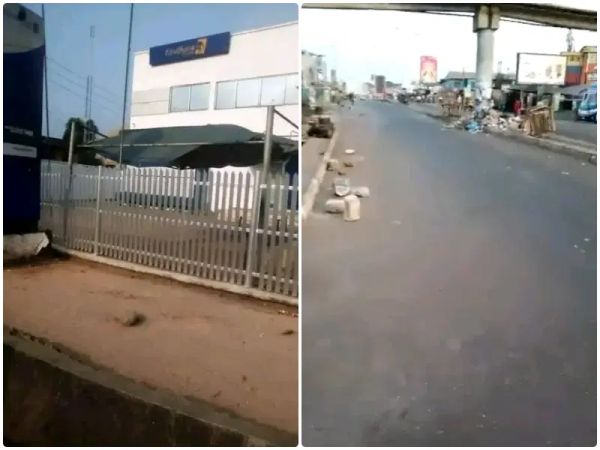 WITHIN NIGERIA correspondent who went round the town to assess the level of compliance with the order revealed many commercial vehicle operators couldn’t come for business while a lot of people remained in their houses.

At Model Primary school, Nsukka,  one of the most popular public schools in the metropolis, many parents and guardians who brought their children and wards were seen looking stranded even as the school gate were also shut. No teacher was seen in the school premises as at 10am.

At Enugu road, Nsukka, banks in that area were also under lock and key.  At Zenith bank one of the staff who spoke to our reporter under anonymity said they were asked not to attend to customers.

He also told our reporter to make his withdrawal at ATM machine pending when they open for business today, if need be.

One of the shop owners at Ogbete main market, Enugu Mr. Ude Godswin who spoke to our reporter explained that life has gradually becoming unbearable with the continuous sit-at-home order.

“This is very much unbearable. I have a lot of supplies to make today but look at the situation.”

Lamenting further, Mr. Ude stressed that ” Mondays here is like Sundays. Nobody comes out for business here on Mondays. Yesterday, as usual we didn’t come  out.

“We observed normal Monday sit-at-home order. Why have to observe another one today is what I don’t know.”

Recall that Indigenous People of Biafra, IPOB on their letter dated January 18, 2023 declared Tuesday, January 24, 2023 sit-at-home to press home their demand for the unconditional release of the group’s leader Nnamdi Kanu.

In a press release by the group, the IPOB said the sit-at-home order must be observed through the South East zone.

The release partly read this; “it is now very clear to the world that Nigeria is a lawless country who never obey their own court order.

“That is why the Indigenous People of Biafra have taken it upon themselves to use the civil disobedience means to continue to demand for the release of  Nnamdi Kanu unconditionally.

“Therefore, the following days have been mapped out for sit at home and be well observed in protest over this illegal continuous detention of MNK and demand for his unconditional release.