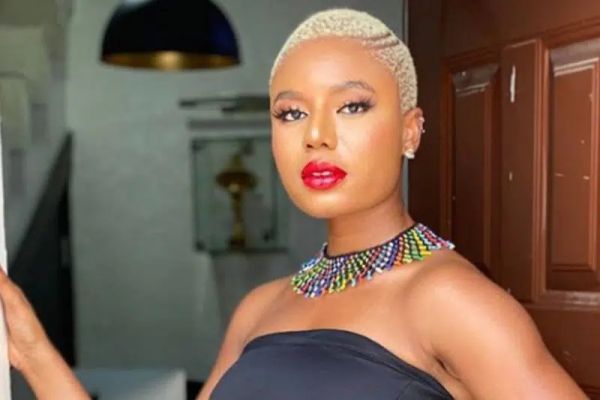 Nollywood actress, Nancy Isime has reacted to the outrage online over her nude scene from the latest Nollywood movie on Netflix, ‘Shanty Town’.

Naija News reports that ‘Shanty Town’ tells the story of a group of prostitutes who plots to break free from the clutches of a notorious criminal mastermind, Scar, played by Chidi Mokeme but political corruption makes achieving liberty a daunting task, and even when someone finally gets freedom, she is killed.

The movie also portrays the harsh conditions of life in the slums and the ways in which poverty can lead to exploitation and abuse.

Nancy Isime plays the lead role of the young girl, caught in the same web of prostitution and critics have widely praised her outstanding performance.

However, the controversial nude scene exposing her breast and other sensitive parts of her caused outrage online.

The scene, which shows Nancy being forced to undress by Nollywood actor, Richard Mofe-Damijo, highlights the vulnerability and exploitation faced by women in such situations.

Reacting to the outrage online, Nancy Isime in a post shared on Instagram reveal that the gorgeous body party people are talking about is not her but a prosthetic.

According to the actress, her body parts aren’t that succulent compared to her body double seen in the movie.

“Enjoy our beautiful masterpiece, get the message from each scene and Focus on the right Focus! Thank you so much for all the amazing reviews so far, I’m so glad y’all are watching and Loving Shanty Town

“Congratulations to the entire cast and crew! It’s another Win for my darling Nollywood”