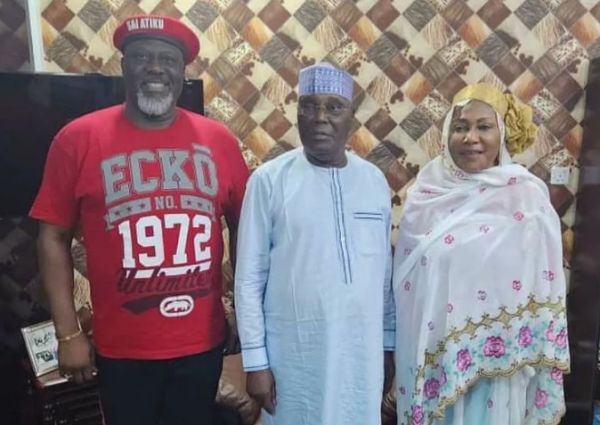 Activist and Kano politician, Hajia Naja’atu Mohammed, has made a U-turn 72 hours after dumping the All Progressives Congress (APC) and announced quiting partisan politics.

Naja’atu, who resigned her position as the Director of Civil Society Directorate in the APC Presidential Campaign Council on Thursday, has met with the Peoples Democratic Party (PDP) presidential candidate, Atiku Abubakar, in Abuja on Sunday evening and pledged her allegiance to the former Vice President.

LEADERSHIP reports that Naja’atu had in a letter dated January 19, 2023 and addressed to the national chairman of the APC, Senator Abdullahi Adamu, said the challenges Nigeria face required her to continue championing the struggle for a better country with a clear conscience.

“I am writing to you to intimate you of my resignation from the All Progressive Congress (APC).

“I am by this letter also informing you of my resignation as the Director of the Civil Society directorate of the Presidential Campaign Council of the APC. It has been a great honour working with you to contribute towards the building of our dear nation,” her letter partly reads.

Also, in a separate statement issued on Saturday, the activist also said she quit partisan politics as the political parties have no ideological difference.

“After much reflection and careful consideration, I have decided to part ways with party politics.

“I have come to the realization that my values and beliefs no longer align with party politics.

“Our political parties have no ideological differences and are simply robes that politicians wear to serve their personal needs and interests at any given time.

“As a result of which we see politicians changing from one robe to another whenever it suits them,” she had stated.

However, LEADERSHIP was on unable to independently confirm whether Hajia Naja’atu has joined the PDP or was only interested in supporting Atiku’s presidential bid in the upcoming general elections.

But, speaking to LEADERSHIP exclusively on Sunday, a spokesperson of the Atiku/Okowa Presidential Campaign, Senator Dino Melaye, confirmed Hajiya Naja’atu Mohammed’s visit to the PDP presidential candidate on Sunday.

Melaye, who appeared alongside Atiku and Naja’atu in the photograph of the visit that has surfaced online, told our correspondent that the Kano politician will speak on the development in due course as the Atiku/Okowa campaign progresses this week.

Also, in a separate post on his social media handles, Senator Melaye told the APC PCC to take note of the development, adding that “Exodus of prominent APC PCC members will be a daily continuous affair from now till 24th of February.”