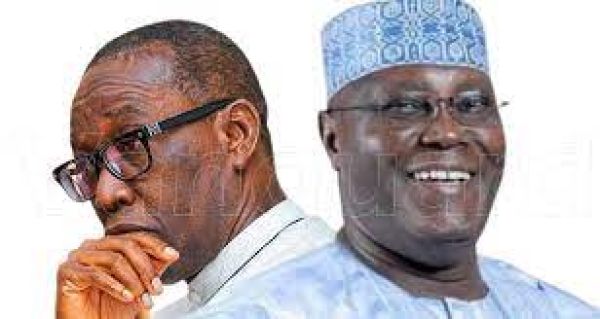 A pressure group, Nigerian Business Communities (NBC) has rallied its support behind the PDP Presidential Candidate, Alhaji Atiku Abubakar and his running mate, Dr Ifeanyi Okowa, because of his business background and investment.

Rising from a familiarisation meeting on Sunday in Lagos, the South West Convener, Mr Oluwatosin Abiola said that the group was galvanising support for the PDP candidate because of his interest in business, and his readiness to engage the players if he emerged the President.

Abiola said: “We are not politicians, we are business owners. We want the to influence voters directly to vote Atiku/Okowa because we are sure when he gets into government, we will get the returns appropriately.

“Our goal is to support anyone that can grow business. It is business people that drive economy. We don’t want our business to continue to crumble and crash. We must demand good and visionary leaders. We need to know who our manages our are.

“It is good to support that presidential candidate who has vowed to engage us a major stakeholders. It is high time for us to take this opportunity to fully engage in mobilising our people in the south west.

“It is not able sentiment, it is about our future. A lot of our youth have left the country in recent years because they see no hope again. We should take our destiny in our hands.”

The convener said that the NBC did its research before settling for Abubakar, who he said had a track record in business.

According to him, members of the group know the people, markets business terrain, and are convinced of what to gain if Abubakar emerged as President.

He said the Abubakar had blueprint to recover the economy and make businesses to flourish again.

Abiola said that the group was poised about doing its part to make Abubakar successive in the election.

“We should come together to be able to influence the decision making process in the country.

“We are dealing with Atiku as a a CEO (Chief Executive Officer) of company not as politicians. It is high time we as NBC press for what we want and get involved to help our businesses and Nigeria.

“We need people who understand business, how to turn small capital into big investment. We don’t need excuses making politicians,” he said.

Abiola said that the group had also commenced reaching out to different business communities and professional group to join in the cause.

The convener, who noted that members of the group, spread across the zone, were into various businesses, said they were taking a huge risks they believed would yield higher returns.

Also speaking, a co-Convener, Mr Jolaosho Kazeem said that the vision of NBC came from Atiku Abubakar because of his commitment to address the economy problems.

Kazeem said that the NBC was working hard to galvanize business owners together in the south west to deliver support the PDP candidate.

“Supporting Atiku will help Nigerians and Nigeria, especially the . We are sure that Atiku will engage business community to change the narrative.”

According to him, the NBC for Atiku/Okowa 2023 came about to complement the work of the presidential campaign council.

He further said that it operates as a sister body with necessary network and outreach to mobilise business communities and support groups across the zone for door-to-door campaign.

Reeling out the group’s goal Kazeem said: “Our main core objective is to showcase Alhaji Atiku Abubakar’s achievements and struggles over the years and his desire for a prosperous microeconomic drive for Nigeria.

“We want to galvanise the business communities for support, foster knowledge and understanding among them.

“This is with a view to enhancing effective partnership and participation of stakeholders, key business owners and all Atiku Abubakar support groups,” Jolaosho, a transport and logistics expert, said.

According to him, NBC forum in the North East came together in March to purchase the PDP’s nomination and expression of interest forms for Abubakar before winning the party’s presidential ticket.

Kazeem commended the support of the National Chairman of the group, Alhaji Gambo Abdullahi, for all efforts to mobilise business community for Atiku.

The meeting had in attendance business owners in the South West Zone (Lagos, Ogun, Oyo, Osun, Ondo and Ekiti) under the leadership Abiola and Kazeem.