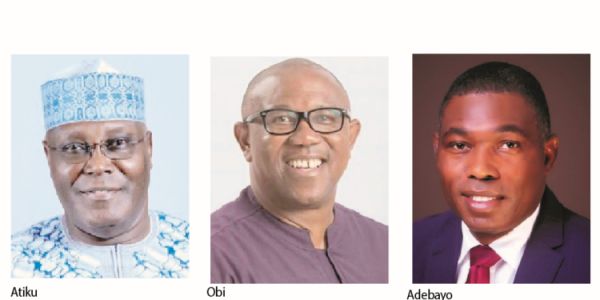 According to the presidential candidates, Nigeria will get back on track as they are ready to tackle bad governance and bring Nigeria back from the doldrums if elected as president.

Atiku, who was the first to appear at the CAN Secretariat, said that he would work for the decentralisation of the nation’s police to states and communities, just as he declared that the major problem of Nigeria is bad leadership.

Atiku, however, noted that all this cannot be achieved without amending the constitution, which he would work towards achieving.

The PDP standard bearer also said, “You must realise that there is a difference between the government that ran this country from 1999 to 2015 and the government that has been running this country from 2015 till date. One example I want to give you; they said they needed restructuring, did they restructure? So, they told Nigerians what they (Nigerians) wanted to hear and did a different thing when they got the opportunity. PDP is not like that.

“I stand before you here not to campaign but to tell you the honest truth; what you have presented to us is what I have always believed in, and if I have the opportunity, I swear to God, I will do it.”

It demanded, among others, state police or a decentralised policing system, devolution of power to states, equal rights for all religions and their adherents, right to self-determination by all ethnic groups, right to control natural resources by communities that bear them, no to open grazing, and equitable electoral system that guarantees the right to vote and be voted for by all.

Atiku had arrived at the CAN Headquarters with his vice-presidential candidate, Governor Ifeanyi Okowa of Delta State, and embattled PDP national chairman, Dr. Iyorchia Ayu.

For Peter Obi of the Labour Party, when he appeared before the clergymen, he told them that the problem with Nigeria is the institutional framework and the lack will to do the right thing.

He said: “We will move the country from consumption to production. Nigeria now is not a producing country. We are no longer in control of our economy. This makes Nigeria a failed state because these are the features.  Over 133 million people are living in poverty. No country can have that kind of number of poor people and move forward.

“When you secure the country, the farmers will go back to farm. That tackles food inflation. And then moving the country from consumption to production, you are moving people out of poverty, ” Obi said.

According to the presidential candidate of the Labour Party, the land in the North can give Nigeria more money than what the country is getting from oil.

On his part, the SDP presidential candidate, Prince Adewole Adebayo said his government will work to get Nigerians to be more patriotic as well as allow everyone to worship God In peace.

He said the interaction between the state and the church requires more respect and understanding, adding that the CAN charter had been captured by the Social Democratic Party manifesto, assuring that he will implement it if he emerges president.

“So, we believe in moving the country forward. The problem still falls back to the leadership of the country. The quality of human beings that have been leading the country is just like what happened to the children of Israel who said they can now have their leader and God gave them Saul.

“So, to solve our problem, the leaders must be truthful and just. In this country, truth is an offense. If a leader is truthful, nobody will remember his religion or party. The church is to participate in politics. But don’t do it the way the politicians do it. Teach us the good way to do politics,” Adebayo said, adding that he will address poverty.

“I know that people are hungry, so they go to church. When they are seeking solutions to their problems, they go to the church. So, the religious organisations must be empowered to take care of the people. We will unite this country and do justice to everyone, “Adebayo said.

The national president of CAN, Archbishop Daniel Okoh, said the idea was to review the Nigerian development because the association wants the progress of the country. He, however, said the Christian body would not be endorsing any candidate for president.

Okoh further noted that the country is submerged by chaos ranging from insecurity and said the document CAN gave to the presidential candidates is to help them review the nation’s crisis and address it.

“Yes, Christians must get involved in politics because it is biblical. Christians should not leave politics in the hands of people that are not supposed to be there. And leaders must consider righteousness in all they do.

“Part of what we are doing today is to ensure that righteousness is entrenched in the polity. CAN remains non-partisan; we will not endorse any candidate. That is why we invited 18 of you to come so that as we are looking at you, we will know whether you are telling us the truth because we have the spirit of God in us.

“Nigerians have heard you, their decision will come up on the day of election. CAN has taken a number of stands on political issues in the country. It took us a long time to arrive at these decisions. Whatever you see or hear, it is important you verify.”

Hinting at its earlier rejection of the APC’s Muslim-Muslim ticket, Okoh added: “We have not changed our earlier position. At the same time, the church is not in any enmity with any political party. The church is founded in love. But our position and understanding of the entire process will help us, ” Okoh added.