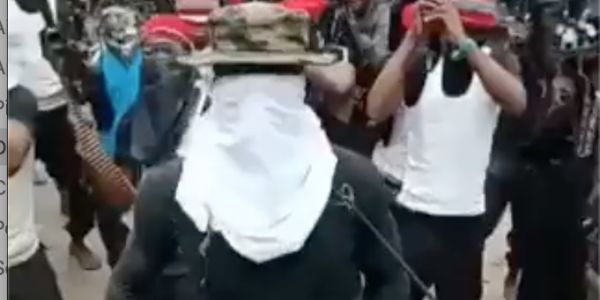 The leader of a new militant group in the Niger Delta region of Nigeria has threatened to unleash hell on the country and make the forthcoming general elections bloody.

According to SaharaReporters, the militant group which identified itself as 'Force of Ekpesu' in the region threatened that the 2023 general elections will be bloody unless President Muhammadu Buhari and governors of the Niger Delta states meet them for negotiation, which the armed militant group described as doing the needful for the well-being of the oil-rich region of the country.

The armed group issued the threat in video footage posted by @GoldmyneTV, showing over 20 militants with various offensive guns and masked faces at a riverside with operational boats.

Speaking on behalf of the group, the leader who did not disclose his identity said, “This video that I’m doing Mr. President, listen to me and listen very good. Also, you governors that are in Niger Delta. I’m the Force of Ekpesu.

“I’m doing this video for Bayelsa State and also the President. This coming up election, if the governor and the President don’t know what to do, I am the Force of Ekpesu, look at my war boats and these are my fighters. I’m getting myself ready all the 24 hours.

“President, governors and senators, listen to me, this coming election, there will be bloody elections in the Basan clan, Southern Ijaw Local Government. You know what to do.”