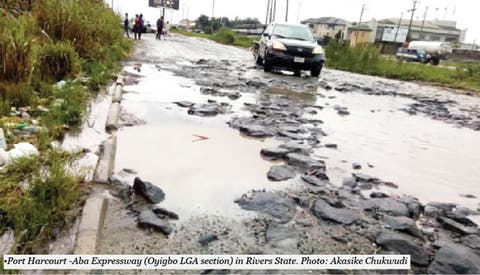 Some federal highways across the country have deteriorated so badly that many Nigerians are calling for an urgent intervention by the Federal Government,

IN spite of the pain and misery, which many Nigerians have to endure when travelling on some of the major highways in the country, the Minister of Works and Housing, Mr Babatunde Fashola, recently shocked the nation by making a declaration that showed just how much he underestimated the situation on the roads.

“The roads are not as bad as they are often portrayed. I know that this is going to be your headline, but the roads are not that bad,” Fashola had said, incurring the wrath of motorists and other road users.

As expected, the minister’s statement provoked angry reactions across the country and critics launched an attack against him, accusing him of insensitivity.

Indeed, a closer look at some of the roads shows that, riddled by potholes as big as craters and worn thin by years of official neglect, they are in dire need of rehabilitation.

Unfortunately every one of the 36 states has its fair share of failed federal highways. Such roads, which many people now consider to be synonymous with death traps, are not restricted to states like Lagos, Rivers, and Kano, they are also found in Ekiti, Enugu and Niger states.

Motorists have described the Enugu-Onitsha Expressway, which is currently in a very deplorable state, as a highway of death and agony.

A cross-section of motorists and commuters, who spoke to The PUNCH, accused the Federal Government of intentionally neglecting the roads in the South-East.

One of the motorists, Aku Nwaigwe, lamented that he spent three days on a journey from Onitsha to Enugu, which used to last a few hours, due to the poor condition of the expressway.

The Federal Government has yet to fix the Suleja-Minna Road because more than 3,000 overloaded articulated vehicles ply the road every day.  Explaining this in an interview with one of our correspondents, the Permanent Secretary, Niger State Ministry of Works and Infrastructural Development, Abubakar Balarabe, said, “The state government has spent over N4bn on the 92-kilometre Minna-Suleja Road so far. But each time the road is fixed, articulated vehicles destroy it. The life span of the road has already expired.  So, the Niger State Government is reconstructing the road. We have finished the 30 kilometre Kwakuti-Lambata Road and we are concentrating on the Kakaaki-Minna Road now.

Also, the Chief Press Secretary to Governor Sani Bello, Mary Berje, said, “Niger State Government has been credibly exemplary in the reconstruction and maintenance of inter-state roads in its jurisdiction. Despite the paucity of resources, Governor Bello, has remained undaunted to make federal roads in the state passable. But yearly, the roads keep begging for intervention because they are exposed to tremendous loads that overwhelm them.

The worsening condition of Nigerian roads, especially the federal highways in Ekiti State, has continued to be a source of anxiety to the people of the state.  The people of Ekiti are waiting for the Federal Government to  rehabilitate federal roads, such as the Ado Ekiti-Akure Road, Ado-Aramoko-Itawure Road, Ado-Ifaki-Ido Ekiti Road and Ifaki-Oye /Ekiti-Ikole-Omuo Road

Many motorists recently started using alternative routes to the 45-kilometre Ado-Akure Road because of its deadly condition. In September, five wedding guests perished when the 18-seater bus they were travelling in plunged into a ditch at the Ado-Ikere end of the road.

Pothole-ridden Ado-Akure Road and similar bad roads in the state have become attractive to kidnappers, who take advantage of the failed portions to launch attacks on travellers. The same story is told about the Akannashan spot between Ado Ekiti and Iyin Ekiti, where many persons have reportedly perished in road accidents.

Also, the present state of Aramoko-Itawure Road, as well as Ifaki-Oye Ekiti and Ikole-Omuo roads, which could best be described as death zones, is of great concern to residents of Ekiti State.

The Chairman, Ekiti Council of Elders, Prof. Joseph Oluwasanmi, said, “Although the council has not made a resolution, we are definitely going to decide on restructuring of the roads. The kind of restructuring we have in mind is that every state should be free to use its own resources for its own development.”

Also, some residents of Ekiti commended the Federal Government for  giving the state and Ondo State the go-ahead  to reconstruct  and toll the Akure-Ikere Road. They said the two states should speed up work on the road.

In Ogun State, a resident of Sango-Ota, Kamoru Ajani, appealed to the minister of works not to forget the Lagos-Abeokuta Expressway.

The last three weeks in October 2019 were very traumatic for travellers on the Calabar-Itu Road and the Calabar-Ikom-Ogoja highway, which leads to Katsina-Ala in Benue State. Travellers were frequently held up for several hours  due to failed portions on both roads, which connect Cross River State to other states of the federation.

Investigation showed that the rainy season and articulated vehicles contributed to the collapse of sections of these roads, thereby turning them into death traps. For example, the Calabar-Itu road, which leads to Akwa Ibom State, collapsed at a spot near  Okurikang, forcing motorists and commuters to spend several hours on the road.

A motorist, James Umo, narrated his ordeal while returning from a trip to Uyo. He said, “I spent close to two hours on that bad spot near Okurikang. There was a gridlock and I had to manoeuvre my vehicle in order to move beyond the bad spot.”

Similarly, commuters often lament whenever they approach certain sections of the 300-kilometre two-lane Calabar-Ogoja Road. The commuters’ ordeal begin from Tinapa junction in Calabar to Odukpani junction, which is being dualised by the state government.

There are failed portions of the road around Obubra, where a truck fell recently at Akpet Central. Three trucks also fell recently along Mbok Junctio.

Also in Ondo State, motorists plying Akure-Ado Expressway called on the Federal Government to rehabilitate the road. Although many highways in the state belong to both the Federal and state governments, the Akure-Ado road is in a terrible condition, while other roads have been patched up. However, it was learnt that road accidents rarely occurred on the road.

But, a road user, Sulaiman Adebayo, told our correspondents that the road had been in a bad shape for a while and it needed the urgent attention of the government.

He said, “We thought that during the raining season the effect will not be much, but the reverse has been the case. If the dry season comes, the dust will be unbearable. We no longer believe that government will reconstruct the road. We are absolutely tired of empty promises. We have lost count of how many times government officials came here to assess the road.”

In Akwa Ibom State, motorists described the Calabar-Itu-Ikot-Ekpene Road as a “nightmare” and called on the Federal Government to rehabilitate it without delay. They lamented the constant wear and tear of vehicles occasioned by the bad condition of the road. Speaking with our correspondent in the Itu Local Government Area of Akwa Ibom State, a motorist, who identifies himself as Mr. Effiong Okon, said plying the road daily was a risky venture.

He said vehicles broke down every day due to the failed portions of the road, adding that travellers spent six to seven hours to cover a journey that ordinarily would have taken about 45 minutes only.

“It is a nightmare plying this road on a daily basis, but we cannot stop because driving is a profession that we have signed to do for the rest of our lives. We appeal to the Federal Government to come to our aid,” Okon said through an interpreter.

In Rivers State, the East-West Road and the Oyigbo section of the Port Harcourt-Aba-Enugu Expressway have been in a deplorable state for more than seven years and motorists get trapped for several hours due to potholes that have degenerated into gullies.

When motorists decide to turn to alternative routes, they spend more hours on the road in a journey that should not last more than an hour.

A commercial bus driver, who simply identified himself as Ajuonuma, said the bad spots on Oyigbo and Aba Road, which are parts of the Port Harcourt-Enugu Expressway, had forced him to turn to Igbo-Eche Road.

Ajuonuma lamented that although work had since commenced on the road, the slow pace of work was adversely affecting his job as a commercial bus driver.

Apart from plying dilapidated roads that have become the lot of motorists across the country, some of them also find themselves at the mercy of kidnappers and armed robbers. Kidnappers lay ambush at bad spots and abduct, rob or even kill their victims. Some commercial drivers plying the Elele-Owerri Road, for example, lamented the incessant attacks by kidnappers who defied the several police checkpoints on the road to ambush passengers.