After Imo, Southeast APC plots to get Anambra

The All Progressives Congress (APC) in the Southeast is not really perturbed about the outrage that greeted the recent Supreme Court ruling, which upturned the election of Hon. Emeka Ihedioha of the Peoples Democratic Party (PDP) as Imo State governor in favour of its candidate, Senator Hope Uzodinma.

What matters is that APC has recaptured the state it lost to PDP in the 2019 governorship election. So now, the party is looking forward to 2021, when it hopes to also capture Anambra State.

At a stakeholders’ meeting in Uburu, Ebonyi State, held at the residence of Minister of Science and Technology, Dr. Ogbonnaya Onu, last December, the party stated in that it intended to dominate the zone’s political space, beginning with the Anambra election next year.

Onu, who became the party’s national leader in the zone after the meeting, told the gathering he refused to accept the 2019 election outcomes that left the party without control of any state in the zone.

“We are the only zone without a governor elected on the APC platform. It is not right. It is not correct. It is not what we want. We want a change,” he stated.

Although issues surrounding the Supreme Court’s position in the Imo governorship election are still being contested, the development seems to have added impetus to APC’s desire to win Anambra State next year and for more victories in the zone.

Sources said since the ruling, the political situation in Imo State has changed, with APC taking the lead in the state affair. For instance, the party, which did not win any seat at the House of Assembly election currently has 18 members and controls the Assembly, following the defection by members from other political parties. There are 27 members in the State Assembly.

The belief is that, if the state’s administration endures and positively impacts the people, it could increase the party’s support base in the zone.

The Guardian investigation showed that the party would throw all it has got in the zone into the Anambra State election, next year.

Possible Fallbacks
SOURCES said the 2021 governorship contest would be a different ball game, both in strategy and execution. It was revealed that APC was poised to make strong statements, using the election to buttress its acceptability in the zone and that the exercise would take another dimension from that of 2017 “because there is no incumbent to return to office.”

A source said going forward, the party has planned to consolidate on the inroads it had made in infrastructure development in the zone to woo Anambra electorate. Part of the belief in the infrastructure is based on the fact that one of its major opponents in the election, the PDP, failed to address them in the 16 years it held sway.

Another is the fact that attention is being given to the zone, irrespective of the alleged not- support it had received in two previous elections so far.

Some projects that are being paraded by APC and which will form the plank of the party’s electoral campaign in the state include Akanu Ibiam International airport, which is being rehabilitated and is billed for reopening in April this year, the Enugu-Port Harcourt and Enugu-Onitsha highways, also being rehabilitated and the Second Niger Bridge.

A former Enugu governor, Sullivan Chime, who was at the Uburu meeting, reminded the gathering there was a need to begin immediate sensitisation on APC’s modest achievements in the zone, to guide the average voters in the coming polls.

He said: “PDP is taking the glory for APC’s achievements in the zone. This was something they could not do in 16 years, and now that those things are being done, they are posing as if they are the ones doing them. We need to create a lot of awareness to let our people know what is going on.”

There are assumptions that the party may also capitalise on the brewing crisis in Anambra State chapter of the PDP, especially since the crisis is in court.

Anambra State PDP has been unable to elect a state executive for some time. Attempt to conduct congresses by the party ahead of the 2017 governorship election was stalled, after the ward and local government congresses.

To prosecute the 2017 governorship election, the party’s national leadership constituted a caretaker committee, led by former Minister of health, Prof ABC Nwosu and Mrs. Josephine Anenih as Secretary, among others. The committee was also empowered to conclude the state congress.

Nwosu had resigned as chairman after the party failed to win the governorship election. His resignation paved way for his Deputy, Chukwudi Umeaba to take over. A state congress committee led by Osita Ogbu arrived the state to conclude the congress, but could not do so, following a problem that arose over the list of delegates the committee came with, which allegedly did not agree with that of the Caretaker’s.

Somehow, a state congress was organised amid protest from the Caretaker Committee, where Chief Ndubisi Nwobu emerged. This occurred when Alhaji Ahmed Makarfi was APC’s National Caretaker Chairman.

When Chief Uche Secondus took over as the National Chairman, the contentious issue of Anambra State congress was revisited. The National Working Committee (NWC) agreed that the exercise was not properly conducted and as such, would not get its endorsement. It approved that the Umeaba-led caretaker committee should continue in office.

This did not, however, go down well with Nwobu, who proceeded to court and secured the court’s nod to continue in office. Although the party’s national leadership was said to have decided to work with the Nwobu committee in line with the court’s pronouncement, the Umeaba Caretaker Committee refused and appealed the ruling.

The Abuja High Court, presided over by Justice Kawu last December, revalidated the leadership of Umeaba. The Court asked Nwobu to vacate office to pave way for the Umeaba Caretaker Committee to conduct state congress in line with their mandate. The matter is still in court. The party’s national leadership, a source said, may likely wade into the matter before the next court sitting and forward its resolution to the court.

Also, part of APC’s game plan is to leverage the discontent that trailed the All Progressives Grand Alliance (APGA) during the 2019 general elections. Although there was no governorship election in Anambra State, it held in other states, as well as other elective positions.

During the primaries that threw up candidates for the elections, APGA was entangled in a crisis. In Anambra in particular, some office holders, who felt entitled to automatic tickets for the support they gave Governor Willie Obiano in his reelection bid, moved against the party, when the tickets were denied them.

There was also discontent over nomination fees collected from interested aspirants that wanted to contest in the primary, which did not hold.

All these misgivings have not fizzled out, as they are yet to be addressed by the party. Besides, pockets of factions still prevail in the party. All these are going to influence the coming governorship election in the state.

Prides Self As Party To Beat
BEYOND posturing, however, APC does not seem to have made the right inroads into Anambra State politics. From its performance in past elections, it will take more than the 2021 governorship election for the party to make required impact in the politics of the state. It ended up not winning any seat at the National or State Assemblies elections in the state in 2019.

Chief Okelo Madukife, State Publicity Secretary of the party, said despite the spread and the party’s modest achievements in the zone, APC has remained a strong party in Anambra State politics, though it has been at the receiving end of electoral heist, particularly before 2015, when the party had not formed the central government.

He said: “Anambra State is the original base of APC through one of its legacy parties. The Action Congress of Nigeria (ACN), which was from Action Congress (AC). AC was barred from the 2007 governorship election by powers that be to assist the emergence of Andy Uba, because it was the only party that was a threat to PDP. The matter was in court when the Supreme Court ruled that there ought not to have been any election at all.

“AC and APGA were supposed to go into a run-off election in 2010, following the inability of the two top scorers to get the required spread. But the election was perverted for APGA, with 25 percent of votes cast in 12 local governments instead of 21, just like Emeka Ihedioha got 12 out of 27 in Imo. To win, APGA needed to get 25 per cent votes cast in 14 or more local governments. It ought to be 18 or more for today’s Imo State. What Maurice Iwu did in 2010 and the fact that court sittings had no limit made the recovery by AC impossible in court. ACN produced the only non-PDP Senator from the Southeast (Anambra Central) in the Seventh Senate (2011-2015).

“In 2013, ACNwas on its way to victory, when the election was perverted in Idemili North, Idemili South and Awka South, leading to the trial of the Returning Officer in those areas and all the supplementary elections. In 2019, APC was the runner-up to APGA.

“I have gone down memory lane to show that before Rochas Okorocha decamped from APGA to APC to put Imo on APC map, Anambra had been the strength of APC, and has not changed from being so. As it stands today, APC is the party to beat in Anambra State and in reality, the only party playing the role of opposition.”

Lockdown Violation: Arraignment of Naira Marley, Gbadamosi delayed due to the Coronavirus pandemic

[OPINION] In Defense of a Pan-Africanist – Dr Akinwumi Adesina

Allah made us kill your soldiers. We are coming after you - Boko Haram leader threatens Chad's President

COVID-19: Only few Nigerians abroad have asked to be evacuated, says FG

Funke Akindele’s arrest, prosecution, a lesson to everyone - Mr Latin

COVID-19: Robots stand in for university students during graduation - while they self-isolate at home

Root of coronavirus is cursed – Oyedepo

Coronavirus: “Africa cannot and will not be a testing ground for any vaccine,” – WHO

I’m not impressed with FG’s conditional cash transfer… how do they identify the poor? - Makinde:

COVID-19: Our hospitals are overwhelmed, US tells citizens seeking evacuation from Nigeria

Boko Haram leader, Ibrahim Shekau begs his fighters not to run in a new audio, after many of them were killed in attack led by Chad's President [listen to audio]

Lockdown Violation: Arraignment of Naira Marley, Gbadamosi delayed due to the Coronavirus pandemic

[OPINION] In Defense of a Pan-Africanist – Dr Akinwumi Adesina

Allah made us kill your soldiers. We are coming after you - Boko Haram leader threatens Chad's President

COVID-19: Only few Nigerians abroad have asked to be evacuated, says FG

Funke Akindele’s arrest, prosecution, a lesson to everyone - Mr Latin

COVID-19: Robots stand in for university students during graduation - while they self-isolate at home

Root of coronavirus is cursed – Oyedepo

Coronavirus: “Africa cannot and will not be a testing ground for any vaccine,” – WHO

I’m not impressed with FG’s conditional cash transfer… how do they identify the poor? - Makinde:

COVID-19: Our hospitals are overwhelmed, US tells citizens seeking evacuation from Nigeria

Boko Haram leader, Ibrahim Shekau begs his fighters not to run in a new audio, after many of them were killed in attack led by Chad's President [listen to audio] 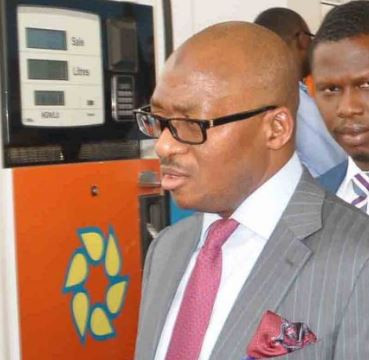