Former Military Administrator of Ondo State, Chief Olabode George says Nigeria is currently at sea. The retired navy commodore, in this interview with Guardian urges President Muhammadu Buhari to urgently call a stakeholders meeting, which must include retired military generals to deliberate on security challenges.

Literally speaking, the entire country is under siege with insurgents, religious bigots, bandits, kidnappers, and other such criminal elements brazenly operating. What do you make of this scenario?
THE present insecurity state in the country should not be left to those in this government because we can’t see what they are really doing, and how they plan to solve the situation, which is escalating.

As a retired military general, I can say that the country’s security apparatus, as presently constituted has failed, and I believe that many of my retired colleagues share similar views.

Right now, we can’t feel what the government is doing, and Nigeria is like a sunken ship at sea. If we don’t do something fast about it, and I repeat fast, it will sink. So, we must all be involved. The insurgency that looked so far away to those of us in the South West is now with us, so the government needs to think outside the box.

We need to begin to address pressing national issues in this country swiftly. For instance, how can the government of Gen. Muhammadu Buhari fail to share information and to address issues of terrorism as requested by the American government for over a year? What were the Nigeria Immigration Services, the Minister of Foreign Affairs and the Minister of Internal Affairs doing? Why were we toying with such sensitive issues? We are too vibrant as people, but we are sometimes too quiet, and this perpetual quietness is endangering the nation. That is why I am calling on President Buhari to invite elders from all across this country and dialogue with them on how to rescue the country.

Many are still baffled about the actual strength of the Boko Haram insurgents, their backers and arms suppliers since it appears to be taking our armed forces forever to get done with them. Has this long-drawn war with Boko Haram not exposed the weakness of our armed forces?

Well, I retired a long while ago, and I know that we assisted in liberating and making South Africa an independent nation. We also played a major role in what Namibia and Angola are today. I can recall how the speech of the late military Head of State, General Murtala Muhammed shut us way above many countries in Africa, but where are we now?

Remember Vision 2020? We are in the year 2020, but where are we in terms of realising the vision? Also, where are we in the league of developed nations of the world?
How can Boko Haram and other criminal elements embark on a shooting spree inflicting this kind of sufferings on the Nigerian masses? And now, no one is sure if it is our enemies that have equipment more than us. So, the Minister of Defence should tell us where the country is today in terms of security because what is unfolding now is too worrisome. Apart from incessant killings, kidnapping for ransom is thriving in almost all states of the federation.

Just why are Nigerians being murdered all over the country, and no one is taking responsibility?
People in the northern part of the country do not have peace, yet they have governors, who are parading themselves as chief security officers of these states. And anytime anybody makes a suggestion to the government on how to beat insecurity, it is interpreted otherwise.

When you were in the military, there were riots, insurrections, and disturbances that were quelled in record time. Even the Nigerian Civil War didn’t last more than three years, what has changed with our military might?
I am as well confused because I would have expected the present military to be more effective because of the emergence of modern technology. Ordinarily, the present military should be in a better position to deal with the insurgency, but we really don’t know who the really enemies are. I know that some people must be funding this Boko Haram, but what is our intelligence department doing? If they have found any, are we short of men? Are we short of weapons, or the necessary tools that would assist our boys? Most times, what we see on social media is how Boko Haram insurgents go behind the lines and wipe out our soldiers. With modern education, technology, and better training, our military ought to have been better today, but why this is happening is what I don’t know.

Do retired generals have a forum, where security issues are discussed with a view to helping the government in power?
No, unless they are invited. Those, who retired are in the reserve, but even the old ones that cannot run still have their brains, and can still be useful in this circumstance. We still have a lot of them who are brilliant. Let the government invite them and have a classical analysis of what is going on, with a view to getting the best option there is. Two heads, they say, are better than one, especially because of the wealth of experience that they have got. To me, right now, it appears we are losing grip.

Are we getting enough external assistance in the fight against insurgents?
There was even a time that we had the British, U.S and other forces outside the country in the Sambisa Forest when the insurgency first started. But the question we should put to our government is, ‘why did they leave?’ I don’t think Nigeria has its own satellite for surveillance, but the foreign powers have this to assist in actually locating these criminals. Have we contacted them for help because we are still a member-nation of the Commonwealth? Can’t we ask for support from Britain? If we can, why are we so shy to do that? This government should explain to Nigerians whether Sambisa Forest is under the ground. If we are able to locate their position, then what is the Air Force doing? Or do they not have any more fighter jets or bombers? Insurgency is being protracted and it is giving a very bad name to our armed forces. We have taken part in so many operations across Africa, from the United Nations, so why cant this government ask for external help?

In your view, are the current service chiefs not due for a change?
I also went through that system. If the service chiefs and the Chief of Defence staff have already reached 60 years or 35 years in service, they should move, otherwise what else are they looking for? Every kobo they collect after attaining the age of retirement (but still stay put) would be refunded to the government. I know they are still in office at the pleasure of the President, but if they have done their run-out-date they must go, otherwise, they will refund every kobo that they have collected thereafter. Look, it is not only the service chiefs that should go, but there are also others who are involved.

Many Nigerians actually want a change in the management of national security?
If Nigerians are getting agitated that insurgency across the country is getting uncontrollable, and therefore called for their removal the president must, and I will emphasise the word ‘must’ listen and call a stakeholders’ meeting, made up especially of retired military generals for a discussion. And you know the North East has a good number of retired military personnel, who can give an in-depth situation report on the crisis.

Does the situation justify the Southwest launching Operation Amotekun, and would you suggest that other geo-political zones take similar steps?
I am totally in support of the Operation Amotekun and I will give you my reasons. We copied the American system of democracy. In America, there are county police, and county is their equivalent of local government areas. The sheriffs, which they have is the local government end of the police, and they live among the people, know everywhere and the people know them. At the states level, there is the Chief of Police at the state police then the Federal Bureau of Investigation (FBI), which is federal. But here, what we have is just the national police. How many policemen do we have that can handle the various communities in Nigeria? I think the total number of policemen that we have is within the range of 240,000 for the entire population and that’s a joke.

More in this category: « Nigerian man dies after sleeping with a prostitute Amotekun vs Shege Ka Fasa: ‘we are going back to something worse than Biafra’ – Balarabe Musa warns »

Coronavirus: Anyone who assaults a pastor is in danger – Oyakhilome

Coronavirus: We are expecting a medical team from China - FG

Another Nigerian doctor dies from Coronavirus in US

Nigeria can now test 1,500 people a day for Coronavirus - Minister of Health

America missed opportunity to stay ahead of Coronavirus – Bill Gates

Those behind Abba Kyari’s death rumour are heartless – Fani-Kayode

‘Nobody knows’ when football can resume - FIFA boss

Coronavirus: Buhari’s daughter steps out of isolation after 14 days

Atiku not collecting bio-data of Nigerians to share money - aide

President Buhari's PA, Bashir Ahmad also tweets at Elon Musk to ask for ventilators after Ministry of Finance tweeted at the billionaire to 'come to our aid'

Italian nurse murders his girlfriend for 'infecting him with Coronavirus '

Chinese city bans eating of dogs, snakes, frogs and cats in the wake of Coronavirus pandemic

Nigerian doctor dies of Lassa Fever, few months to the end of his housemanship

COVID-19 cases to hit 1m within the next few days

Nigeria, others seek $100b debt relief

We Are Suspending Business In Abuja, Lagos – Commercial sex workers

Coronavirus: Anyone who assaults a pastor is in danger – Oyakhilome

Coronavirus: We are expecting a medical team from China - FG

Another Nigerian doctor dies from Coronavirus in US

Nigeria can now test 1,500 people a day for Coronavirus - Minister of Health

America missed opportunity to stay ahead of Coronavirus – Bill Gates

Those behind Abba Kyari’s death rumour are heartless – Fani-Kayode

‘Nobody knows’ when football can resume - FIFA boss

Coronavirus: Buhari’s daughter steps out of isolation after 14 days

Atiku not collecting bio-data of Nigerians to share money - aide

President Buhari's PA, Bashir Ahmad also tweets at Elon Musk to ask for ventilators after Ministry of Finance tweeted at the billionaire to 'come to our aid'

Italian nurse murders his girlfriend for 'infecting him with Coronavirus '

Chinese city bans eating of dogs, snakes, frogs and cats in the wake of Coronavirus pandemic

Nigerian doctor dies of Lassa Fever, few months to the end of his housemanship

COVID-19 cases to hit 1m within the next few days

Nigeria, others seek $100b debt relief

We Are Suspending Business In Abuja, Lagos – Commercial sex workers 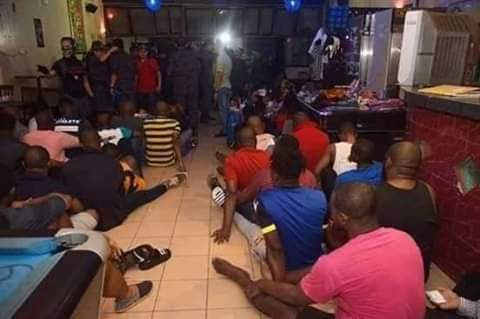 Attacks on police officers, 17 Nigerians, one Ugandan arrested in Malaysia