The Coalition of Northern Groups on Wednesday unveiled the symbols of  Operation Shege ka fasa, the security outfit that will tackle the kidnapping and banditry in the zone.

The outfit, the group said would be formally inaugurated in the coming weeks when all necessary legal processes might have been formally adopted and ratified by the northern states’ governors.

It is literally embedded with the strength of a roaring lion like that of a leopard in Amotekun of the South-West.

Shege Ka Fasa is designed to be the vanguard of the entire North encompassing every ethnic group and religion and to be deeply patriotic in its operation.

The phrase Shege ka FASA in Hausa means, ‘I dare you.’ 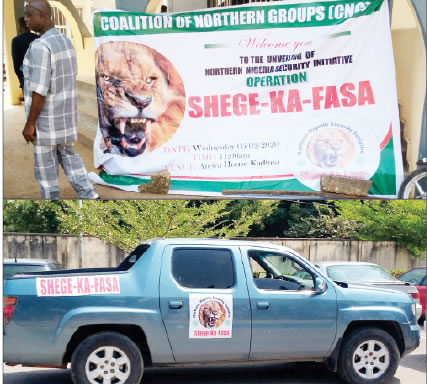 The CNGs comprises over 36 groups in the region that gave the Igbo in the North, three-month ultimatum to quit in October 2017.

However, there was truce before the expiration date.

But the coalition on Wednesday, announced the unveiling of the security outfit symbols which it claimed, when inaugurated, would complement the efforts of the security agencies in the country.

Unlike the South-West security outfit, Operation Amotekun, launched with fanfare in Ibadan, Oyo State on January 9, 2020, there was no presence of any dignitaries from the region.

Spokesman for the CNGs,  AbdulAzeez Sulieman, at the Arewa House in Kaduna, said the region for the past 12 years had struggled with myriad of challenges of dwindling economy, rising poverty and a crippling security situation.

Suleiman said, “If the state governments and other leaders of the region fail to take action to protect the region the way their southern counterparts are doing, CNG is willing to follow through with all the processes of obtaining the required legal backing for the outfit from the relevant federal authorities.

“We resolved to formalise this request by writing to the governors through the Northern Governors Forum and to the leaderships of traditional, religious and cultural institutions in the region.

“By this, today we unveil the symbols for the Shege Ka Fasa outfit which would be formally inaugurated in the coming few weeks when all necessary legal processes might have been completed or formally adopted and ratified by the northern state governors.”